What impact did parish churches have on people's lives?


Many churches like St Mary's had a a central tower, and were built to a cruciform plan - they looked like a cross when seen from above. Traditionally the bottom of the cross pointed west and the holiest part of the church (The chancel and sanctuary) pointed east. It is believed that when the church was originally built only the chancel, the tower and crossing beneath and the north and south transepts were built. Later the Nave was added.

In Medieval times the parish churches were plastered on both the inside and outside and then vivid pictures to illustrate Biblical scenes were painted on them. You have to remember that most people could not read so they where taught the bible stories by looking at various pictures of them. (Doom Paintings) Very little of these pictures remain today since they were not designed to last a long time and often they were painted over again and again. In St Mary's church some of the graffiti on the pillars remains. 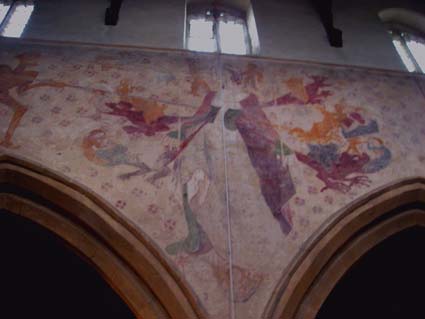 The church inside was also very different. There weren't lots of pews ( the wooden seats in rows, these came in the Victorian era) but instead the main part of the church ( the nave) was a large empty space were markets, meetings and all sorts of village events were held. The church was central to peoples lives. All the people went to church. They did not go just on a Sunday and they did not go just to go to church services.

In Medieval times it was the Manors, not villages, that were the main economic and social units of life. A manor consisted of a manor house where the Lord would control the villages surrounding it, and all the land around this was divided into meadow, pasture, forest, and cultivated fields. The fields were further divided into strips; a third for the lord of the manor,a bit less for the church, and the remainder for the peasants and serfs who lived in the area. All of this land was shared out so that each person had an equal share of of the land both good and poor. The peasants and the serfs ( the slaves) spent at least half the work week working on the land belonging to the lord and the church. The rest of their time was spent as they wished. Since there were no shops all the food these peasants wanted to eat they had to grow for themselves, and their animals. Most of the peasants were farmers, each having some land for their crops and the common land for grazing their sheep and cattle on. You must remember that in these times there were very few people and all of them lived off the land. Some of the peasants time might be spent working on special projects such as clearing land, cutting firewood, building roads, buildings and building bridges.


Control was also exerted on people by the church.None of the peasants drank the local water as it was filthy and drinking water from streams usually killed them. So instead they drank wine or ale. This was not strong like nowadays but a very weak and people did not really get very drunk on it. Much of this ale and wine was stored in the church and was from where many people might buy it. The peasants also made their own. The reason for the alcohol was to kill off all the bacteria in the local water and make the water safer to drink. In these times there were no sewers. The people had no knowledge what caused disease and so they lived often in unsanitary conditions. The Villages consisted of some ten to fifty families living in rough huts on dirt floors, with no chimneys or windows. Usually one end of the hut was given over to storing livestock like ducks and geese. The Furniture was very poor - what ever someone locally could make. The beds were made on the floor and made more comfortable by straw or leaves - maybe in a sort of mattress. The peasant diet consisted mainly of porridge, cheese, bread made from rye not wheat and called black bread, and a few home-grown vegetables which were only available in the right season as little food could be kept with no refrigeration. The peoples of this age did have many ways of preserving food however.

The Peasants had a hard life, but they did not work on Sundays or on the many saints' days, when they could be expected to go to church, and then on to the nearby fairs and markets which were often held in the church. The serfs life was much harsher.

With all this very hard life the peasants and the serfs needed some respite. This was provided by the church.

The Priests in Medieval times were normal people. Some were good and other corrupt. The church in this country at this time was entirely Catholic and as today the Priests were not allowed to marry or have children. Many Priests often did marry and have children, but this was frowned on by the church who did not want to see church land being given away on the death of the Priest to his children. All the services were given in Latin ( as they still are in some parts of the world). This meant that the ordinary people had very little idea of what was going on. The sermon was in the native language and the paintings in and around reinforced the stories of Heaven and Hell. The most popular of these paintings is that of the last judgment known as a doom painting

In many churches there were paintings of St Christopher opposite to the main entrance so that evereyone would see it on entering the church. It was a common medieval belief that you would not suffer a sudden death if you had seen St Christopher that day. Often the paintings were about moral values and biblical stories.

It was quite common for the youngest son in a family to enter the church, so that the eldest could by tradition inherit the farm and the middle son would then be free to see to the other family duties or to become a local merchant, or a soldier.. The peasants daughters had just one destiny in life, and that was to become wedded to hopefully a wealthy man of influence. If this did not happen and it didn't for most then the woman was destined to have a very hard life of making all the food, and working for the lord of the Manor like her husband. Life was short. The woman had large families. Childbirth was likely to kill the woman as there were no doctors and hospitals. Many children did not make it to grow to adulthood, usually dying to common diseases. Entering your son as a Priest ensured that he received a good education if your family could not afford to pay for it.

The Priest held regular services at the church. The presence of the peasants at service was expected, not optional. Throughout the year, additional services would occur for festivals and the celebration of a number of saints days. These services were also mandatory. Throughout the year the population had to attend baptisms, marriages, and funerals where the Priest would officiate. At all times, the Priest was the person to whom the people would look for advice and the solving of any local disputes. In times of famine, which were all too often, (especially in the early winter months), the Priest was a spiritual shoulder to lean on. If the case of hunger was great, there was a chance he might be able to assist.

At an appointed time of year, the local Priest was obliged collect the tithes (taxes) that were due. This was another opportunity to see his flock and keep up with the gossip. The tithes, in addition to funding the church and Priest's activities, would also be used to maintain the fabric of the local church and help the poor of the district.

Usually the Priest may have also run a 'school'. This is not the kind of school that taught all of the village's children, but one that taught selected individuals to read and write Latin. These people then ensured that aspects of government and transactions were dealt with. This included keeping records, duplicating deeds, diplomas etc, and keeping accounts. They became known as Clerks and Clerics, a term that was at that point fairly interchangeable. This gave rise to the 'civil service' that became so dominating later on. Priests were also often 'employed' by wealthy noblemen in the capacity of personal secretary. The Priest also acted as a witness to business that needed no formal records other than the reliable witness of a highly regarded member of the community.

All the people believed in God and they believed that the church and the Priest were working on God's behalf. The people knew no different because this is all that they had been told. Very little news was available. Higher ranking Priests were usually appointed by the local Lord or maybe the King because of their administrative abilities.